Business technology has become incredibly complex in the past few years. Companies often fall victim to their own success, growing so quickly that the IT department can’t keep up. This can often lead to the network infrastructure being put on the back burner while employees work daily just to keep operations afloat.

Organizations often don’t have the time or expertise to evaluate their own infrastructure, which is why ISG Technology offers comprehensive network assessments. But what do one of these examinations look like, and what can companies get out of them? Let’s take a look:

“No two companies are going to have the same needs.”

The problem with laying out a first step for such a complex process is the fact that no two companies are going to have the same needs. A network assessment could mean checking the local compute environment, but it could also have to do with looking at a business’s circuit load. One section of the assessment could be as simple as determining whether or not a physical system has single points of failure.

This is why ISG recommends that companies that come to us looking for a network assessment should first determine what their end goals are. Administrators may not be able to completely vocalize what they need, but they should at least have an idea of what they’re after. Basically, the point of this exercise is to get the organization from its current state to its future state. If we know what a company’s intended future state is, we can recommend clear and decisive actions officials should take in order to get there.

What kinds of issues does the average company run into?

Although each organization is going to have its own unique situation, there are some pretty common problems that our engineers run into on a regular basis. One of the most apparent has to do with mobile devices and their use for work purposes. The Pew Research Center found that just under 70 percent of American adults currently own a smartphone, which means a majority of office workers currently have such a device in their pockets at all times.

Due to the advanced capabilities of these devices, workers are increasingly using their smartphones to access company data. The problem with this is that these employees very rarely take any measures to protect their phones. An infographic from Consumer Reports found that 34 percent of smartphone owners didn’t take any sort of security measures with their phones, and that’s including a screen lock with a four-digit password. Therefore, companies that aren’t taking proactive steps to secure private data from stolen or lost phones are at significant risk of a data breach.

Another major issue we often see is businesses not controlling network physical access in the right way. Many companies are now relying on voice-over-Internet-protocol technology, which allows workers to speak to clients via the Internet. It’s an amazing technology with multiple uses, but IP phones can also be an access point for criminals. These devices require a cable connection in order to get on the Internet. This means that anyone with the ability to get into the office could potentially plug a laptop into one of these cords and instantly access the entire network.

This is of course a very specific example, but it shows that companies often aren’t thinking of network security correctly. The reality of the situation is that hackers really don’t care how they gain access to a business’s information. Whether it’s by stealing an employee’s phone or dressing up as a janitor to plug into the network after hours, a criminal with enough initiative will find whatever holes exist in current security standards and exploit them.

ISG has the experience needed to do the job right

An ISG network assessment has one major component that sets us apart from other companies: experience. The average ISG engineer has been with the company for eight or nine years, which means they know our network assessment playbook backward and forward. They’ve seen all the classic mistakes – as well as some unconventional ones – and they know what the modern business needs to solve these problems.

When you work with ISG, you can rest assured that you’re dealing with some of the most experienced professionals in the field. If you’d like to see what this wealth of knowledge can do for you, contact an ISG network expert and set up your free IT infrastructure assessment today. 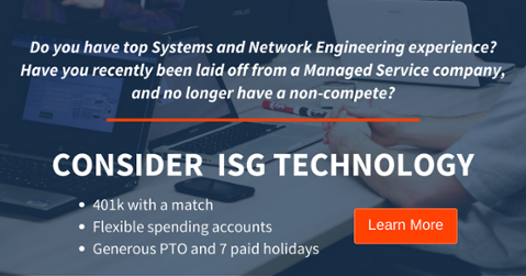 What can health care get out of data mining? Data dilemma: Where does police body camera footage go?
Scroll to top